About the Dominican Republic

The Dominican Republic is a country which shares the Island of Hispaniola with Haiti. Santo Domingo is capital and was Christopher Columbus’ first landing site.

Since 1844, when the country finally gained independence from Spain and Haiti, the country has been marked with political instability and corruption. As a result, there has developed a large gap between the extremely wealthy and the very poor. Recent studies indicate that the population consists of 5% are wealthy – 15% are middle class – 80% are poverty level and below.

The country’s spiritual makeup is approximately 6% Protestant, 7% Practicing Roman Catholic and the remaining majority is a mixture of Non-practicing Roman Catholic, Voodoo and Atheism. Evangelical Christians have seen significant increases in their numbers in all denominations, but there are many villages and towns in the country that still have no evangelical work. Operation World lists the Dominican Republic as one of the least evangelized countries of Latin America.

The landscape of the Dominican Republic is beautiful and has many tourists. Tourism is one of the countries largest industries. There is another side to the Dominican Republic, poverty. There are many poor villages where they do not have basic living accommodations such as proper housing, electricity, running water, sanitation and clean water.

The pictures show the contrast from beautiful beaches to poverty stricken villages that are just minutes away! 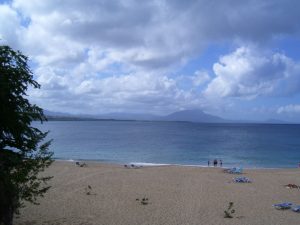 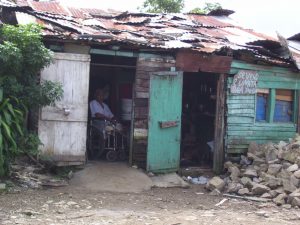